History of the castle

On the outskirts of Azoudange, away from everything, is the Romécourt estate. You have to take a small road of several kilometres to get there. It is a 300-hectare complex of cultivated and wooded land, with a fortified residence which was listed in the supplementary inventory of historical monuments by order of 28 December 1976.

This estate is steeped in almost four centuries of history, which we will discover. 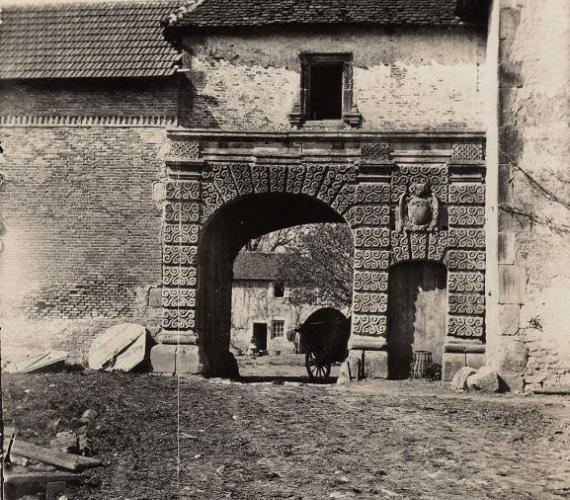 In the 16th century, the lands of Romécourt formed a fiefdom dependent on the bishopric of Metz. In 1564, the fief was granted by the Cardinal of Lorraine to Michel l’Enfant, secretary to the Scottish Queen Marie Stuart and officer of the Dieuze salt mines. From 1600 onwards, Pierre Moussin, auditor of the Bar Chamber of Accounts, was at the head of the estate.

In 1608, he received the letters of ennoblement from Duke Henry II and the title of “seigneurie” for his property in Romécourt. The property was then enlarged by the addition of land from the Muhlberg (or Milbert according to the writings) farm and from the Mitterking (Métrequin) ban, a village near Freiburg which was razed to the ground during the Thirty Years’ War. In 1680, the property was bought by Joseph de Martimprey. But where did this family come from? 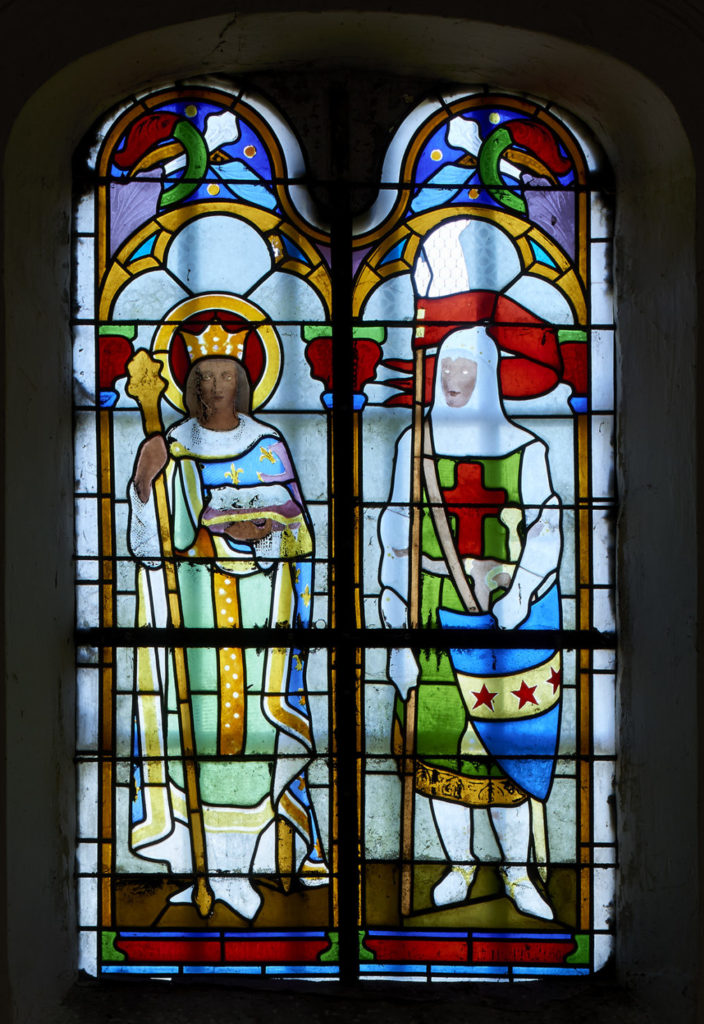 The de Martimprey family originates from Franche Comté, its founder is Hugues de Martimprey, a crusader knight, killed in 1250 at the battle of Pharnia in Egypt, while participating in the 7th crusade under the leadership of Saint Louis. Almost all his descendants, for nine generations, were squires in the service of the Duke of Burgundy. It is in a document of 1525 that the family’s establishment on the Martimprey estate in the Vosges (which was part of the Corcieux ban) is mentioned for the first time. In 1680, a grandfather decided to leave the Martimprey estate to his younger son on the death of his father and to move to Romécourt, which he had bought shortly before. This is how the estate came into the de Martimprey family, which still owns it.

A victorious ancestor at the battle of Valmy

One of the descendants of the purchaser, Jean Joseph Felix de Martimprey, had chosen a career in the army. In 1792, he took part in the battle of Valmy. A certificate signed by Kellerman pays tribute to his bravery. His prolonged absence due to his military career led to him being considered an emigrant by the Comité du Salut Public of Réchicourt, which confiscated his property. It was thanks to the citation signed by Kellerman that he was able to recover them.
But Romécourt lost its status as a parish. Its archives are deposited at the bishop’s palace in Metz (see Moselle Departmental Archives). Then the estate went through the trials and tribulations of our region in the 20th century. This is how we arrive in 1919 when Xavier took over Romécourt in joint ownership with his mother, his brother Hugues and his sister Nicole. In 1921, Jeanne, Xavier’s daughter, was born in Nancy and is the sole heir of the family. She is currently the owner of the estate. She is the widow of Mr Jacques Viot, French ambassador and president of the Alliance Française, who died on 4 July 2012 and is buried in Romécourt.

A visit to this Renaissance-style complex is a must. The original plan, still respected today, is that of a fortified residence forming a quadrilateral of 90 metres by 47 metres around a central courtyard. Four corner turrets flank the entrances. The bricks and tiles were fired on site. Traces of the kilns can be found at the place called “la Tuilerie”. The Vosges sandstone was used to solidify the structures and to decorate them. 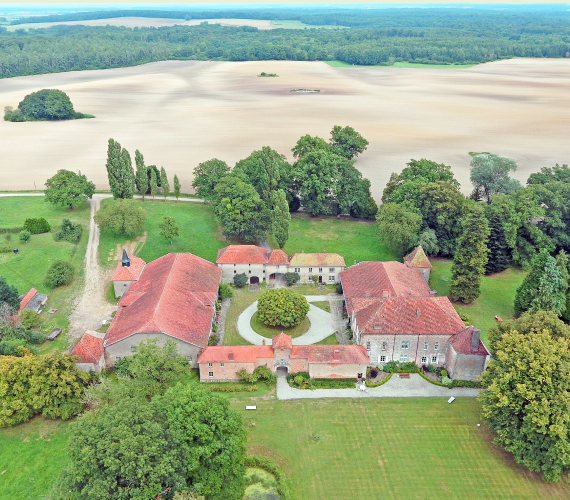 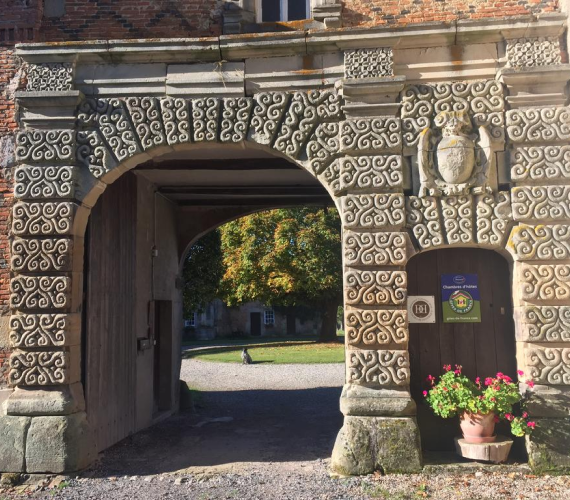 We arrive at the eastern gate, known as the German Gate. It is one of the most successful examples of 16th century Lorraine art. Access to the inner courtyard is through a low-arched doorway with a small pedestrian gate on the side. The exterior face is made of Vosges sandstone and is richly decorated (pilaster, bosses): a rare decoration in our region. The room above the porch was the chaplain’s room. On the left, we can see a good example of what the ensemble was: walls with black brick lattices, loopholes, watch tower and corner turret. Around the courtyard, houses, sheds and stables opened onto this protected interior space.

The south-western part retains its old proportions and there were two bread ovens. The Renaissance fountain (more than 15 metres deep) is framed by two Corinthian half-columns supporting a band with a lion’s head in the centre.

A rope was passed through the lion’s mouth to lower and raise the buckets of water. 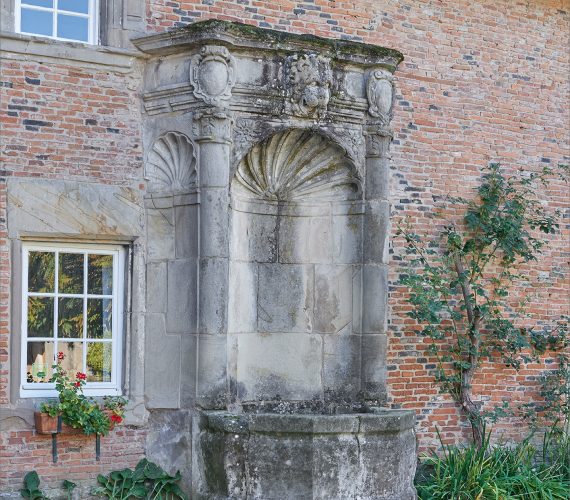 Both the west and south sides are very similar to the original state with their defensive loopholes. However, in the 18th century, windows were opened on these façades, which had very few, especially on the ground floor. On the south side, the decoration of the first floor windows is in the Louis XIII style; it therefore differs from the windows on the courtyard. A fan-shaped staircase leads to a classical-style porch. 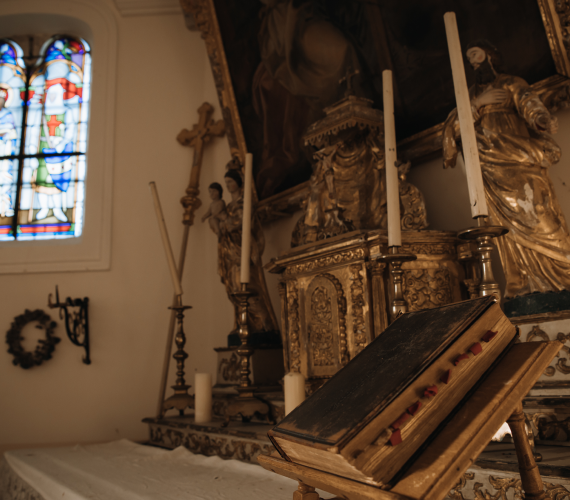 The chapel (which can be visited on a guided tour), built into its north-east turret, has retained its defensive character, as evidenced by the loopholes in the wall. The windows on each side of the choir are original, the others were added in 1867. The stained glass windows represent on the left Saint Louis and Hugues de Martimprey, who accompanied the king on the crusades and was ennobled by his Majesty on that occasion; on the right Saint Adelaide and Saint Charles Borromeo. Two coats of arms on the ceiling bear the Martimprey coat of arms.

The estate, where more than 50 people once lived in isolation, is not dead. It has been preserved and handed down from generation to generation since 1680 by the de Martimprey family. The restoration of the dwelling after the fire of 1997, the Allée de la Belle Croix replanted after the ravages of the 1999 storm, the repair of the chapel roof, the restoration of the stained glass windows, all these works (carried out by Jeanne and François Viot who manages the estate with his aunt) are examples of this. 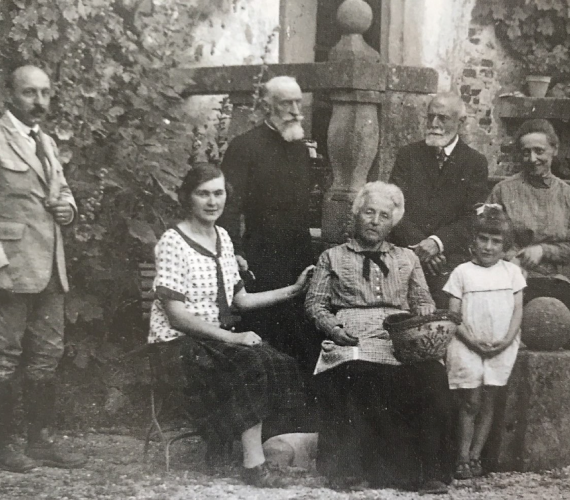 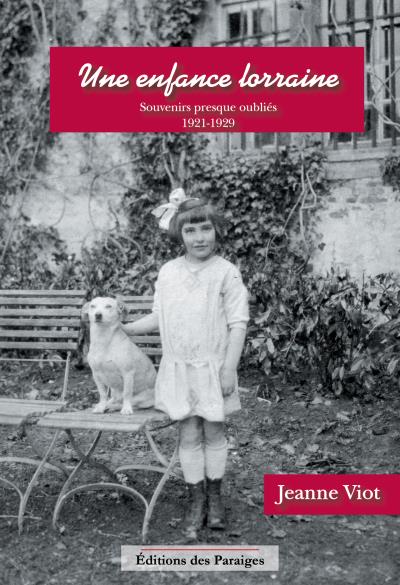 Book : A childhood in Lorraine

Madame Viot, now 100 years old, still comes to spend the summer months in the setting of her childhood, which she recounts in a lovely book which is worth reading (Une enfance lorraine. Souvenirs presque oubliés 1921-1929, éditions des Paraiges)

The press speaks about it